What is a Wedding Band Showcase Anyway?

Last year (November 2012) saw our first wedding band showcase outside Scotland. Held at the Holiday Inn Maidenhead we had five great wedding bands perform live for a large number for prospective wedding clients. The result was lots of bookings for the excellent bands who performed on the day and more importantly, lots of couples who had the chance to see and hear the bands in action before booking.

We've been running wedding band showcases in Scotland since 2002 and in fact were the first entertainment agency to do so. We're very proud to have been the first company to have realised how useful these events are to our clients (not to mention the bands we work for).

One thing we have noticed is that wedding band showcases are changing, with a worrying trend that we feel we should point out to those of you who are thinking of attending one in the near future.

But first of all, let me explain for those of you who have never been to a showcase how they work and what you can expect.

The idea is that the organiser, most commonly an entertainment agency, arranges for a number of bands and sometimes other wedding style entertainers, to perform at the same venue on a day or evening when most bands are available. That's why you'll never see a showcase on a Friday or Saturday - most bands are out performing on these nights.

The venue is usually a hotel function suite.  We use, among others, the fine facilities at The Holiday Inn, East Kilbride because it's centrally located and easy to find plus the room is a good size with easy access for the bands and all their equipment. Parking is also free and plentiful and there is always a bar open if you fancy a wee glass of something before or during the event.

We'll normally have each band play four songs, which takes around twenty minutes.  This gives you ample opportunity to get a feel for the band's style and how well they play.  The whole event lasts for around two hours. Hireaband's expert advisors will be on hand with the band diaries so that you can check if your favourite is available and if they are, you can actually hire them there and then.

You'll pay a reservation fee to secure the band.  This can vary depending on which agency is organising the event.  At the end of the day, the more you pay as a deposit or reservation fee, the less you'll have to pay later. £100 will secure any band at a Hireaband showcase and we accept cash, cheques or card payments. With Hireaband you can change your mind up to ten days after making your booking and get your money back with no fuss whatsoever.

After the event is finished there's normally a substantial queue of people keen to book, so don't be shy, make sure you move quickly to secure your favourite band.  We've seen disappointed people at every single showcase who have left it too late and find that the band they wanted was booked only moments before.

You should get a receipt at the showcase for your deposit/reservation fee with a brief outline of the essential information like the date and venue for your wedding, your names and the name of the band you've chosen   A day or so after the showcase you should get full written contracts from the agent with all of the details included.  At Hireaband we issue electronic contracts which you sign online with a few clicks.  The band gets exactly the same contract and you are now secure in the knowledge that the band you've chosen is all yours.

Earlier though I mentioned a worrying trend in showcases and if I may I'd like to outline my concerns now.

At a Hireaband showcase we ask each band to come and perform exactly as they would at your wedding. That means they wear what they'd wear at your wedding and perform with the equipment they'd use at your wedding.  This gives you the chance to see the band exactly as they'd appear on your big day. If they take up a lot of space at a showcase, chances are small venues will be unsuitable, if their equipment is scruffy or in a bad state of repair, you'll spot that at the showcase. If they're inadequately lit then the chances are you won't be able to see them on the evening of your wedding reception - in fact you'd be amazed at the number of bands that actually don't have any lighting at all, but happily you won't find any of them on the Hireaband web site. 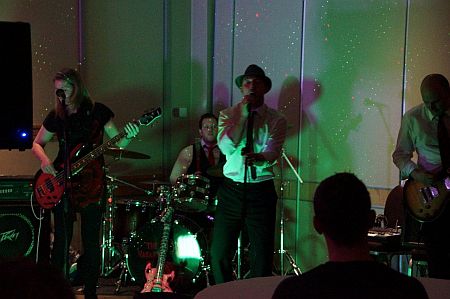 Some showcases however use a different format. These will feature a number of different bands, just like any other showcase, but they will all be performing through the same equipment and using the same lights.Generally this equipment and lighting is of a much higher standard than most bands will actually own. PA is incredibly expensive.  It's not unusual (Tom Jones eat your heart out) for a band to have ten grands worth of gear on stage.

This is a bit unfair on those bands who invest heavily in their own equipment to give you the best possible experience.  It means that any band with poor quality or minimal equipment has the same chance to impress as the band that takes pride in their sound and look. For you, it may mean that the band you book at a showcase delivered in this style bears little resemblance to the band that actually rolls up at your wedding. Sure it will be the same personnel, but they may sound remarkably different from the last time you heard them.

I'm not for a second saying this is done in order to deceive anyone. On the contrary, the agents that we're aware of that do their showcases in this way are beyond reproach when it comes to honesty and straight dealing.  We just think that in their efforts to make the showcase more like a night out they've perhaps not realised the potential for some bands to appear much better than they actually are.  Even an average band can sound and look good with a very expensive PA, lights and an experienced sound engineer on hand.  Let's face it, imagine seeing Jedward at a pub gig! Nowhere to run, nowhere to hide! - but put them on an X Factor stage and even those two talentless tone deaf chancers can seem impressive.

So showcases are a great idea. At the very least it's a free afternoon or evening out (by the way you should never pay to attend a showcase, and that goes for bands too). You'll get a flavour for what's out there and there's also the strong chance that you'll find the perfect band for your wedding.

Our next free to attend showcase is on the 4th June  2013 at The Holiday Inn East Kilbride. We're almost full already but you can still reserve a seat by pre-registering. You'll also get a sneak preview of the bands that will be playing on the night if you click on that link.

Hireaband showcases are the original and still the biggest and best wedding band showcases. Around 350 couples each year find their wedding entertainment at our Scottish shows, so come along on the 13th January and say hello, you'll be glad you did. 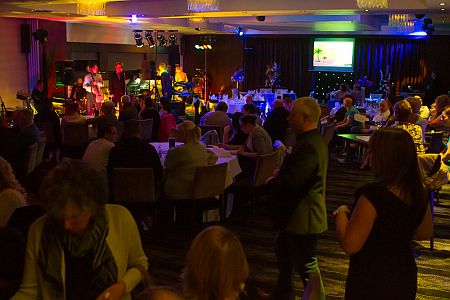