Since 1999 THE MIX have entertained audiences all over the world. Based here in the UK, the band is a top choice on the corporate, function and private party market.

With 2 stunning female vocalists and 4 talented musicians in the standard 6 piece line up, THE MIX creates a full and realistic sound and pride themselves on sounding tight and as close to the original as is possible on every hit they play.

For a testimant of their ability, have a listen to the tracks on the right hand side of the page. All of these are recorded live so you can hear the quality of the real performance.

A sax player is an option for the 7 piece, then adding the trombone and trumpet completes the 9 piece band, adding a real punch to the sound. A percussionist makes the line up to a 10 piece when required. 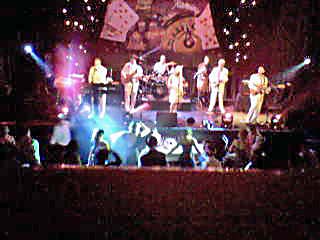 Having played on HMS Invincible for its De-Commissioning Ball, to a New Years Eve open - air party in Dubai for 15,000 people; their experience is second to none.

From arrival at the venue, right through to the last dance, THE MIX will take care of everything musical to make your event run smoothly. A DJ is also a popular option and a great addition to the night where any special requests and band breaks can be catered for.

Using a top range PA System and great lighting, plus a star cloth back drop as an option; the stage and dance floor are guaranteed to look amazing,

Past venues played include:

Sorry, The Mix doesn't have any videos right now Send us an enquiry and we'll get back to you, or check out the rest of the act profile.

Sorry, The Mix doesn't have any photos right now Send us an enquiry and we'll get back to you, or check out the rest of the act profile.

Sorry, we don't have a setlist for The Mix yet Send us an enquiry and we'll get back to you, or check out the rest of the act profile.

View your wishlist (0)
The Mix

Thanks to Heidi?s vocal on ?Perfect ? weve secured The escada Job for Channel 4 and ITV 1Many thanksUniversal Music Uk

The Mix as usual performed to the highest standard at this years cowes event with there tribute to Abba, what a versatile bunch you are!Cowes Week 2013

You guys really rocked, wouldn?t hesitate having you again for our Gala in 2014Brett Bullock: Crystal Cruises USA

Simon, please pass on our thanks to the rest of the band for a fantastic party in the port last week, you were amazing (especially the request for the Gypsy Kings songs! Hope to book you again.Marco Group

All of us feel we need to thank ?The Mix? for a fabulous night at The Savoy, after a long time sat down! You really pulled it off, filling the dance floor with so many celebrities, many thanks simon.Football Writers Association