Ian has spent eleven years carefully developing his Tom Jones Tribute act, to a point where he is now recognised as among the best in the UK. His show guarantees all of the energy and power of the original, creating an unbelievably accurate illusion of Tom Jones actually on stage! Ian will walk, talk, dance and sing in the manner of Sir Tom himself.

If you are a fan of the original, you will recognize all of the moves and routines that Tom himself uses on stage. Ian has never failed to leave the audience shouting for more'!

Ian has worked with many of the top Tribute Artists in the country, providing entertainment to everyone who appreciates the Tom Jones style of music. He has worked with small intimate audiences right up to a packed stadium of 43,000 fans, where the whole crowd swaying,arms raised,singing 'Delilah!"

Imagine your event with the dance floor packed, as people move to the fabulous sounds of Kiss, Sex Bomb, It's Not Unusual plus many other tracks which Tom has made into international hits in over 40 years at the top!

There is truly something for everyone in Ian's show, with numbers like 'What's New Pussycat','I Who Have Nothing' and 'Delilah' guaranteeing the audience will be singing along at the tops of their voices! We're confident that this really is the UK's premier Tom Jones Tribute Act.

Ian has a 100% reliability record and a reputation for punctuality, professionalism and courtesy gained over the last eleven years. He has performed in England, Scotland, Wales, Northern Ireland, Spain and the USA.

The show is self contained using the latest sound and light equipment.

For a Tom Jones Tribute at its very best - choose The Essential Tom Jones! Get an instant direct price, no obligation quote. You'll be pleasantly surprised at just how affordable a show of this standard can be. 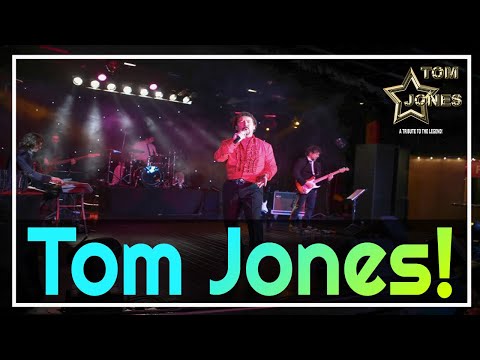 This is just a flavour of the style of music we play. To listen to our demos click/tap the “Tracks” tab
1.What's new pussycat
2.I who have nothing
3.The boy from nowhere
4.Love me tonight
5.She's a lady
6.The green green grass of home
7.Mama told me not to come
8.I'll never fall in love again
9.Walking in Memphis
10.Help yourself
11.Take me to the river
12.Give a little love
13.Hard to handle
14.Help Yourself
15.Leave Your Hat On
16.Show Me
17.Shake A Tail Feather
18.Great Balls Of Fire
19.It's Not Unusual
20.Delilah
21.Kiss
22.Sex Bomb

Thank you for your efficiency, it all worked very well! Thanks again!

Ian Anthony as Sir Tom Jones is up there with the best Acts to play Ashton and Lea G.C. Arrived early to set up and once the show started was in character all night. Got the audience singing and dancing. Highly recommended.

Thank you so much for entertaining me and my guests at my wedding. Everyone thoroughly enjoyed your act and loved the fact that we had kept your appearance such a surprise!You kept everyone spellbound and even those few who weren't up on the dance-floor really enjoyed listening to you. It was the highlight of the day for me and my husband. You have a fantastic voice and sound just like the real thing! We loved your ad-libbing when faced with my little nephew trying to get up onto the stage with you too! The lights were also excellent and made a real impact.We appreciated the highly professional and friendly way you dealt with our initial enquiries right through to the day and will recommend you to everyone. Your presence set our wedding out from all other weddings and we and our guests will always remember that you were there and how much fun we all had. All the best for the future Ian, and thanks once again for an absolutely brilliant and memorable performance.

Just got back from a couple of days away after our wedding ! I can't tell you how much everyone enjoyed your performance at our wedding. It really was one of the highlights of the day. Your voice was magnificent and your choice of songs got everyone up on the dance-floor. You even got a couple of the men throwing moves I have never seen the likes of before!

I just wanted to say thanks for the great night at my 60th party! Everyone enjoyed your performance, especially those writhing hips, absolutely brilliant performance as Tom Jones.The whole night went to plan from beginning to end.You made it a night to remember, it didn't last long enough. I will certainly be recommending you.

I am writing to extend my grateful thanks and also those of the other 300 guests at our Charity Dinner Dance on Saturday night. It was a truly sensational night and your marvelous contribution was a resounding success! Your performance as 'Tom Jones' was absolutely brilliant and it was wonderful to watch the guests dancing and singing along to your songs!Complimentary remarks were made about the background music played throughout the meal and your sound and lighting technician, Sheila, played a very important part in the whole presentation. You are a very professional couple and are deserving of continued success. It was truly an evening to remember and I am so pleased that I made the phone call last year, to book your show.I will certainly be recommending you in the future to anyone needing a very high quality and professional entertainer. I wish both you and Sheila many more successful ventures.

Remarkable! Ian's voice is just so close to the original. My customers are all from South Wales, Tom Jones's home country, and they think Ian Anthony is fabulous.

A fantastic show! Ian completely wowed all our guests with his performance at our Captains Dinner. His service was excellent from the first phone call I made, right through to the professional way that Ian and his team worked with us on the night.I would recommend Ian to anyone who needs a fantastic show and a complete entertainment service. He will be back!