There are Beatles tribute bands and then there's The Cheatles; a five-star act from the North West of England. Startlingly authentic, The Cheatles recreate the original look and feel of The Fab Four with the utmost precision. The look is sharp and the harmonies are second to none. 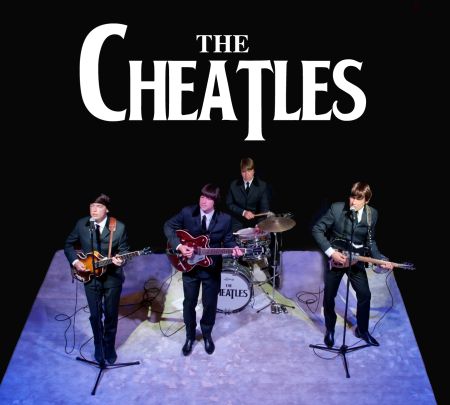 Performing two sets of absolute classics, The Cheatles can also call upon some hidden gems; some of the most choice ‘B’ sides and all the secret Beatles oldies that are most requested yet never get played!

Corporate event experts, they've been booked to perform at high profile events such as the 2014 British Grand Prix at Silverstone, Jamie Oliver's Big Brighton Jamboree and The IGD Glitter Ball. The boys are also often booked for weddings and private functions where only the very best Beatles themed entertainment is required!

Having firmly established themselves as one of the UK's very finest vintage Beatles tribute acts, they've generated quite a following. Performing for, and in some cases with, some of the biggest household names they're the VIP's choice. In a market with so many options this is no mean feat! Just some of those names include Jamie Oliver, Paul Scholes, the Hong Kong Jockey club, Formula One, David Tennant, John Major, Nelson Mandela, The Emirates 7 star Hotel in Dubai, Tesco, Waitrose, Sainsburys, Morrisons, Nestle and many many more!

Why not add your name to that list and book The Cheatles for your next event. Get an instant quote and date check online now!

Sorry, The Cheatles doesn't have any videos right now Send us an enquiry and we'll get back to you, or check out the rest of the act profile.

Sorry, The Cheatles doesn't have any photos right now Send us an enquiry and we'll get back to you, or check out the rest of the act profile.

Sorry, we don't have a setlist for The Cheatles yet Send us an enquiry and we'll get back to you, or check out the rest of the act profile.

View your wishlist (0)
The Cheatles

They seem to have captured the pure essence of the original Fab Four, the early raw energy, these boys deliver time and time again!

Wicked! I played drums with them and it rocked!

So, so good at our wedding reception, we chose them because we love what they do! 'David Tennant'

There is something very special about that band

We were knocked out with the detail of The Cheatles, they even advised us to put proper slim knitted ties on our very own mannequins, ha!