The Brat Pack, refreshingly youthful recreation of the vibe and atmosphere of the original.

The entertainment industry is packed with err...Rat Pack style crooners and swingers. Some are superb, some not so much and some are sadly deluded. Most however make the mistake of trying to copy just the vocals, some work a bit harder and go for the look too, but none achieve what The Brat Pack achieves - the essential, casual, swinging, devil may care "feel" of the original Rat Pack, basically having a party on stage. 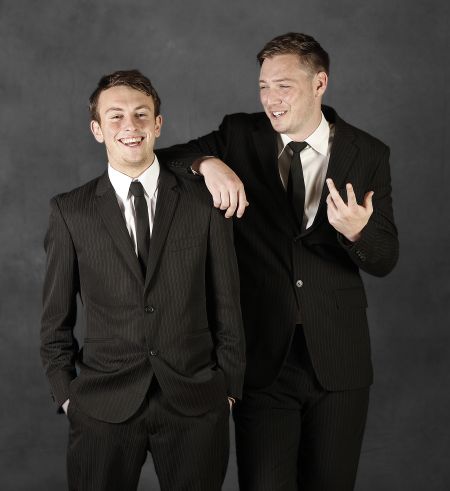 My name is Del Cotton and I started this business in 1999. In that time I've seen countless acts, bands, singers, you name it. The vast majority are honest acts that provide a decent level of entertainment. Most however don't make it on to the Hireaband roster because we like the acts we work for to be better than average. In fact our basic criteria is "outstanding" because that's the kind of entertainment we want to see and we feel it's the level of entertainment our customers deserve.

I saw The Brat Pack at an event with a fellow director very recently. We were attending a showcase hosted by a production company with whom we work very closely. Their acts are so good that we never fail to be impressed and to be honest they provide us with some of our best selling shows. Expectations were high.

The Brat Pack is a new production and they were competing against some very established and polished acts indeed. However the two lads who make up The Brat Pack, Jamie and Drew, stole the show - simple as that. There was a booking frenzy for this act that evening, the likes of which we rarely see. So why all the fuss?

They can sing - of course they can, they move round the stage with confidence and of course they are well presented. But what makes this show stand out is the chemistry between the two lads. It's mesmerising. Any audience member will feel they're part of a private party with these two performers. Great music, world beating songs and a delivery that is a cross between Sinatra and Dean with Eric and Ernie - it's that good.

The Brat Pack isn't just another Rat Pack tribute brought to you by an overweight cabaret singer too stuck in his ways to do anything different. This is fresh, exciting and delivered by two young men who, in our humble opinion, are destined to be the UK's busiest act of it's kind.

The show has limited availability - that's not a sales pitch, it's true. But contact us anyway - you never know. Is it the best show we've seen? It could well be, so hire The Brat Pack now before Vegas gets a whiff. Enquire Now

Sorry, The Brat Pack doesn't have any photos right now Send us an enquiry and we'll get back to you, or check out the rest of the act profile.

Sorry, we don't have a setlist for The Brat Pack yet Send us an enquiry and we'll get back to you, or check out the rest of the act profile.

View your wishlist (0)
The Brat Pack

Hi Del, the Bratpack show was superb. Everyone was buzzing about the boys, I'm glad I went with this option, they really made our night. They stayed around and spent some time chatting to everyone after their show.