Michael Quinn - Swing With The King

If your event calls for the ultimate in Swing, from classic artists such as Frank Sinatra & Michael Buble then Michael Quinn is the answer. Combining years of experience into one outstanding show... 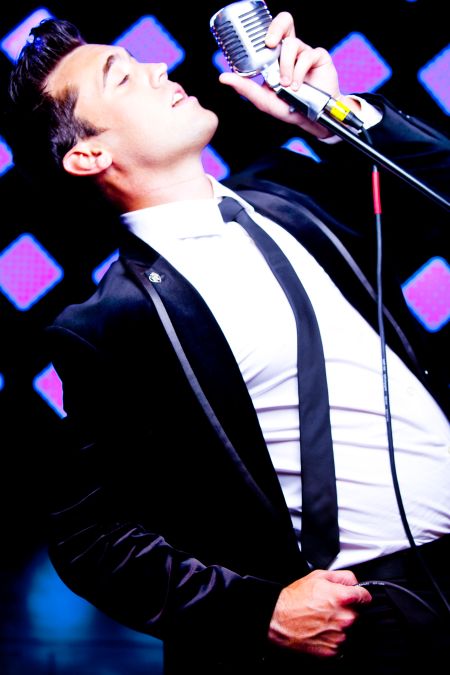 Michael Quinn pays tribute to his idols in his show "Swing With The King." Featuring music from some of the worlds best loved performers including Michael Buble, Frank Sinatra and Elvis Presley, .

This show will take you on a swinging ride from the 1950s to the present day. Michael has been fortunate to sing all over the world, from London's west end to the brights lights of Las Vegas.

Michael has starred in such shows as: JAILHOUSE ROCK (London West End and Caesers Palace Las Vegas), Disney's National Tour of BEAUTY & THE BEAST, Andrew Lloyd Webber's latest West End revival of JOSEPH & THE AMAZING TECHNICOLOUR DREAMCOAT, HAIRSPRAY (Oasis of The Seas, the biggest cruise ship in the world). Michael has also had the pleasure of performing in MONTE CARLO at the MONTE CARLO SPORTING FESTIVAL and also the MONTE CARLO WORLD TV AWARDS.

Michael also enjoyed sharing the stage with such stars as: MICHAEL BALL, BRYN TERFEL, RUTHIE HANSHALL and JOHNATHAN PRICE at The Opening Gala of THE WELSH MILLENIUM CENTRE. Michael was chosen to close the whole show in front of the Royal Family.

Michael's passion is singing the music of his idols: Michael Buble, Frank Sinatra, Sammy Davies Jr and of course the king of Rock&Roll Elvis Presley. His show 'Swing with The King' will feature the great hits of these great crooners and leave you dancing the night away with some 1950s Rock & Roll.

Sorry, Michael Quinn - Swing With The King doesn't have any videos right now Send us an enquiry and we'll get back to you, or check out the rest of the act profile.

Sorry, Michael Quinn - Swing With The King doesn't have any photos right now Send us an enquiry and we'll get back to you, or check out the rest of the act profile.

This is just a flavour of the style of music we play. To listen to our demos click/tap the “Tracks” tab
1.Overture
2.Feeling Good
3.Can't Buy Me Love
4.Call Me Irresponsible
5.Mack The Knife
6.Mr.Bojangles
7.For Once In My Life
8.What Kind Of Fool Am I
9.That's Life
10.Crazy Little Thing Called Love
11.Always On My Mind
12.Elvis Medley (long medley closer)
13.Playout
14.Moondance
15.Beyond Th

View your wishlist (0)
Michael Quinn - Swing With The King

2500 people left the theatre feeling lifted and entertained. "Swing With The King" is the hottest ticket in town.

Michael Quinn - Swing With The King

Michael reminds me of a young Elvis Presley.