Providing listeners and guests with an experience that is sassy, seductive and distinct, the Grace Ellen Quartet can provide an original and classy soundtrack to any event. 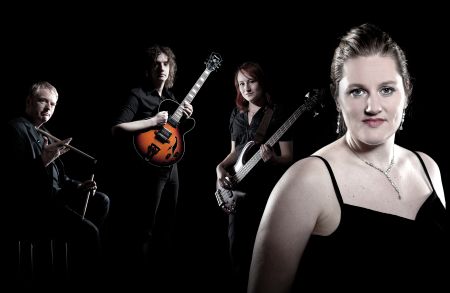 We can blend in with your wallpaper to give unobtrusive, but excellent mood-making music, or step up to the mark with some traditional swing and jazz numbers to get everyone moving!

The Quartetâs repertoire is firmly rooted within the Great American Songbook. Ella Fitzgerald and Billie Holiday rub shoulders with Madeleine Peyroux and Linda Ronstadt in their set lists with Blues, Latin and some Pop standards thrown in for good measure.

Originally trained as a classical singer, Grace changed her singing style when she realised her love for jazz was greater than her love of arias. After returning to her northern roots in 2006 she began to take her singing a step further and has been performing in the northeast music scene ever since.

Matt is an experienced and versatile guitarist who plays across a range of styles and within a variety of different settings. As a professional musician Matt has worked with a multitude of bands both as a sideman and as bandleader including 3 successive performances at Gateshead International Jazz Festival.

Bassist Katy Trigger is an experienced player of both upright bass and bass guitar, but generally speaking only plays one at a time. Whilst starting out as a rock bassist, her taste and playing style developed after playing in various jazz, funk, soul and blues bands. She now splits her time between gigging in various bands and song writing.

John started drumming at a very young age rattling knitting needles on tea trays. In his teens he realised his calling and took up drums to get girls (it didn't work). Over the years John played in many genres but is a lifelong jazz fan and it was only fear of the skill involved that stopped him before now. When not happily swinging behind the Quartet he plays in theatre pit bands and on the odd session. One day he will own a gong.

The Grace Ellen Quartet is based in northeast England and is available for weddings, private parties, corporate events or anything else you may care to consider! Enquire Now and add some swing to your next event!

Sorry, Grace Ellen Quartet doesn't have any videos right now Send us an enquiry and we'll get back to you, or check out the rest of the act profile.

Sorry, Grace Ellen Quartet doesn't have any photos right now Send us an enquiry and we'll get back to you, or check out the rest of the act profile.

This is just a flavour of the style of music we play. To listen to our demos click/tap the “Tracks” tab
1.A Fine Romance
2.Autumn Leaves
3.Black Coffee
4.Blue Skies
5.Cry Me a River
6.Dance me to the end of love
7.Disney Jazz Medley (Chim Chim Cheree, Everybody wants to be a Cat, Bare Neccessities)
8.Don't Know Why
9.East of the sun and west of the moon
10.Every Time We Say Goo

Thank you so much to the Grace Ellen Quintet for their wonderful contributions to our event. A flawless performance from a highly talented group of people, topped off by the beautifully sultry tones of Grace Ellen herself.C Davies

Grace Ellen added a fabulous musical accompaniment to the 'Breakfast at Tiffanys' fund raising evening at Queen's Hall, Hexham. Further 'Grace Ellen' bookings at Queen's Hall would be much appreciated to showcase more of this young lady's talent.L Horncastle

Grace Ellen has a wonderfully earthy and gutsy voice. When I hear her sing I'm immediately transported to a smokey Parisian cabaret. She will certainly be invited back to the Take Ten stage.P J Buchanan

A show-stopping performance, from a slick and professional group. The Grace Ellen Quintet gave a fantastic performance and offered up a great variety of old favourites which everyone could recognise and sing along to.J Farthing

As smooth as a good merlot and as rich as dark chocolate... Grace Ellen's voice is by turns soulful, evocative and uplifting.C Henderson