Glasgow Wedding Band Make A Name For Themselves

DMS, the latest and one of the greatest Glasgow wedding bands to grace the Hire A Band web site and roster. 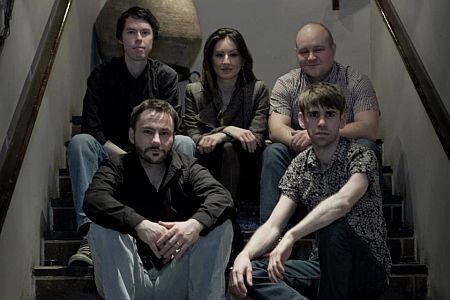 We loved this band as soon as we caught them in action, but in truth we've been a bit slow off the mark because they've been incredibly popular since they formed almost seven years ago. Of course we'd heard of them, but as Scotland's busiest entertainment agency, it took us a while to get the chance to see them live. Boy were we mad at ourselves for missing out. Even I was dancing, and as anyone who knows me will tell you, I don't dance!

If we were to build a band from scratch to perform at weddings, parties and corporate events, we'd come up with an exact copy of DMS.  This is a band that takes what they do seriously, but who don't take themselves too seriously.  You get five of the best musicians Scotland has to offer, a "can do" attitude, 100% reliability, great equipment, fantastic songs and to be honest five lovely human beings.  No egos, no tantrums, no outlandish demands just a happy bunch of nice people who love to play.

There is one thing in their arsenal that sets them apart from most other bands, an intangible that has nothing to do with musicianship or even experience. Dead Man's Shoes ooze charisma. They love what they do and it shows in every performance.This makes the difference between a good night out and a great one.

So is this the perfect band? Maybe, but surely there is a flaw? Well, the only thing we can't figure out is where they got their name. So we asked Chris, the band leader for an explanation. He rather sheepishly confessed that the decision was arrived at after reading a Daily Record article during a rehearsal break. One of the band members, he won't say who so it was obviously him, thought it sounded great and the only real alternative to the option favoured by the band's roadie. So Ladies and Gentlemen, we are proud to recommend to you, the fantastic Dead Man's Shoes - so nearly named The Page Three Stunners! We'll just call them DMS and hope nobody notices!