Aged 28 Gemma, originally from Liverpool, has been a Professional Singer since 2004 . She trained in Musical Theatre and Classical Voice. 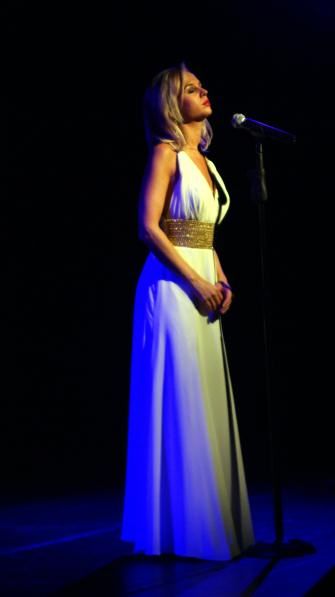 Gemma's professional career started at the age of 20 when she travelled abroad to work as part of a touring swing show as a singer/dancer throughout Europe. From then on she went on to perform throughout the UK and Europe in various groups and productions, including touring the Army bases in Germany and performing at many prestigious corporate events. Enquire Now

A great deal of Gemma's professional career has been spent working on the high seas. She has worked as the lead singer of a 6 piece showband for a Swedish cruise company, and also a singer in various Showteams onboard Cruise ships including Costa and Thomson.

Most recently Gemma has worked as a guest artist for Royal Caribbean Cruise Line, Holland America and Costa.

Gemma currently performs as a soloist throughout the UK performing at Corporate Events, Charity Balls and Weddings.

This has been a great year professionally for Gemma. She has performed at an exquisite Wedding at the prestigious Kensington Roof Gardens in London. Gemma has also had the honour of leading the National Anthem at Wembley Stadium and performing at the Royal Albert Hall. Enquire Now

Sorry, Gemma Louise Edwards doesn't have any videos right now Send us an enquiry and we'll get back to you, or check out the rest of the act profile.

Sorry, Gemma Louise Edwards doesn't have any photos right now Send us an enquiry and we'll get back to you, or check out the rest of the act profile.

We got married on 29th December and had booked Gemma to sing 4 songs during our church service. 1 before the Bride arrived, 2 during the signing of the register and 1 to sing us out of the church. Gemma was simply sensational! The voice of an angel and so very professional. She really made our wedding ceremony so magical and there wasn't a dry eye in the church when she sang. Every one of our guests commented on how incredible Gemma's performance was and they were all blown away by her voice. No one could believe how perfect she sang! Thank you again Gemma for helping make our day so special. It will be something we will treasure always. We highly recommend Gemma and her superb talent. Mr & Mrs Campbell! xxx

Gemma sang at our wedding ceremony this September and was just fantastic! She has an amazing voice and her performance was just what we had hoped for. All of our guests commented on how she added something special to our day. Gemma is well presented and very professional. I would definitely hire her again in the future! Thank you Gemma!Mr & Mrs Da Silveira

I booked Gemma for my 30th in July it was absolutely amazing all my guests were blown away she performed a variety of songs and then finished on nessun dorma (my fav) which totally blew me away the whole room went silent she really bought the house down. Gemma' s voice is truly outstanding and can perform so many styles it was like having 4 different singers classical then jazz then modern. I couldn't have asked for more. I will always use Gemma and so many people from my party wanted her details. Weather its a wedding, party, special event Gemma really can do anything . Not to mention she is so polite and friendly her warm personality only adds to her amazing performance . Gemma is truly remarkable . Beccy Blease ,Tv Presenter for Rocks & Co Sky