Ailie Robertson is an international harpist based in London. Her diverse repertoire encompasses classical, folk and jazz music. 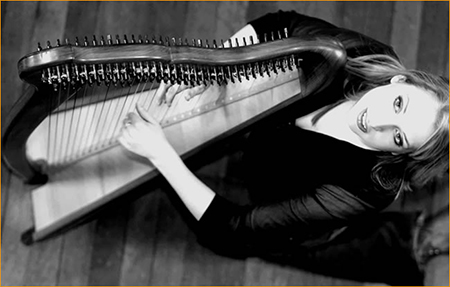 She has some of the most impressive credentials in the harp world. A 5-time National Mod Gold Medalist, she was also 1st prizewinner at the inaugural London Harp Competition, and best overall musician at the Edinburgh Competition Festival. She has represented Commun na Clarsach for Scotland at the Pan Celtic Festival in Ireland, and in 2005 she was awarded a scholarship from the ESU in recognition of her ‘virtuosic clarsach playing’, and was a winner of the St Albans New Roots award. She was the winner of the Live Ireland award for ‘Instrumental Cut of the Year’ for her debut album ‘First Things First’.

Ailie now enjoys a successful solo career throughout the United Kingdom, giving regular public recitals in addition to freelance orchestral engagements. She provides the highest level of performance for weddings, functions and corporate events and has performed for HRH the Queen, at the Scottish Parliament, and for many VIP events.

For wedding ceremonies, the music is carefully tailored to suit your individual wishes. Ailie has a comprehensive list of over 200 pieces of classical, light pop, jazz and folk music. She can either perform on the concert pedal harp or the clarsach (lever harp).

To find out more about this act or to get a direct price then enquire now.

Sorry, Allie Robertson - Harpist doesn't have any videos right now Send us an enquiry and we'll get back to you, or check out the rest of the act profile.

Sorry, Allie Robertson - Harpist doesn't have any photos right now Send us an enquiry and we'll get back to you, or check out the rest of the act profile.

Sorry, we don't have a setlist for Allie Robertson - Harpist yet Send us an enquiry and we'll get back to you, or check out the rest of the act profile.

'We used Ailie Robertson who is based in Edinburgh and she was superb! We wanted modern songs for the ceremony and she learnt Elbow- one fine day for me walking down the aisle, Snow Patrol-Run for signing the register and we walked out to good old Robbie-Angels. She was very well priced so we had her play an extra hour. Everyone commented on how great she was and she set the mood for the rest of the day. Money well spent.'