Skip to main content
Coronavirus Support for our Clients and Entertainers Donald lives and breathes the work and legacy of Robert Burns. Internationally recognised as an authority on the great man Donald plays Robert Burns with authority and obvious affection. 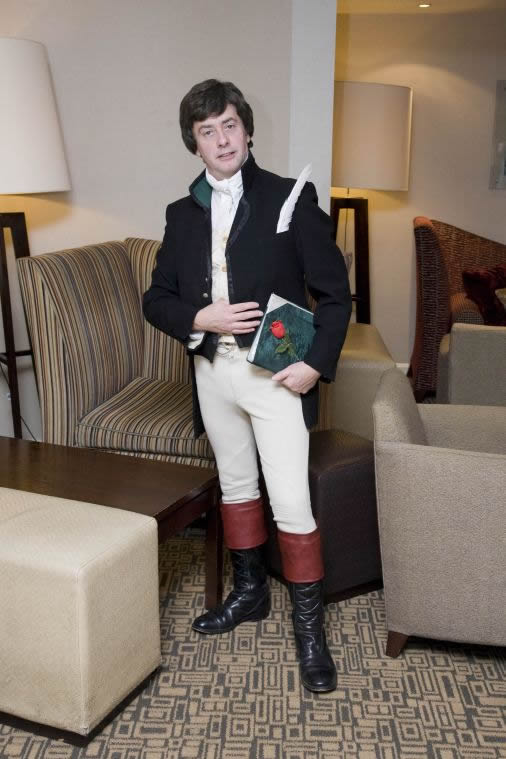 If you are hosting a Burns event or visiting Scotland then again Donald can bring Burns back to life for you and your guests. Perhaps your Burns event is taking place overseas - Donald travels the world providing his unique and uncanny interpretation of Burns to great acclaim.

Robert Burns at your wedding? Well as you know he was a bit of a rascal with the ladies but he'll be on his best behavior - probably!

Robert Burns, alias Donald, will be dressed in full 18th century period costume complete with boots, book of poems, quill and of course a rose for the happy couple.

He'll enter the room after the speeches, being introduced by the last person making a speech - normally the best man.

He'll thank the best man for inviting him back to the 21st century and then introduce himself to the happy couple, congratulating them on tying the knot, and explaining what's about to happen. He integrates the couple's names into poems, straight from the heart.

He finishes with asking the pair to hold hands and saying to the bride that this poem is from the groom to herself, and recites "My love is like a red red rose." He bows and leaves the couple with his best wishes and encourages the guests to enjoy the rest of the evening.

The performance lasts between 10 and 20 minutes. Rabbie is also available for photographs with the happy couple and guests.  Instant quotes are based on him being on site for one hour.  Extended appearances can be arranged.

Sorry, Rabbie Burns Tribute doesn't have any videos right now Send us an enquiry and we'll get back to you, or check out the rest of the act profile.

Sorry, Rabbie Burns Tribute doesn't have any photos right now Send us an enquiry and we'll get back to you, or check out the rest of the act profile.

This is just a flavour of the style of music we play. To listen to our demos click/tap the “Tracks” tab
1.All of the poetry of Rabbie Burns

Donald was very instrumental and interactive when portraying Robert Burns and at the re opening of the Hermitage.and afterwards in Friars Carse Country House Hotel . His tale and performance of Tam O' Shanter was enjoyed by every one, and we felt the overall day went very well.

I want to thank you so much for everything. I am so glad I contacted you. I will be sure to keep your name on file for any future custom tours that come my way the wish to visit Ayr. Enjoy the rest of the summer!

Donald as 'Rabbie' played a big part in the delivery of six archive film workshops from the Scottish Screen Archive, that I ran as part of the Burns an' a' That! Festival. Whilst a silent animated film of Tam O'Shanter screened, Donald as Rabbie presented the poem to the children. The children were able to see on screen what 'Rabbie' was describing in the poem and to ask him questions. The workshops worked really well on an educational and fun level and the teachers attending commented that "Rabbie visiting was a great idea" and "the appearance of 'Rabbie Burns' really caught the children's attention". The workshops proved a big success with children, teachers and librarians alike and we all had great fun.

Thank you very much for the very interesting tour. Everybody enjoyed it, and you were a very good storyteller and guide. I would like to see the Robert Burns tour, so next time I will contact you. How long before do you have to know? And next time I will try the new pub on the other side of the bridge!

Hi Donald, Good to hear from you. I've been meaning to email all week to tell you how much I enjoyed the tour - you are a wealth of knowledge and bring everything to life with your delivery.